We are the leading suppliers of Metric & Inch series of stud bolts to Petrochemical Industries. We Manufacture stud bolts as per thread according to ASME B1.1 or according to as per customer requirement.

Petrochemical stud bolts are used in many types of categories in Petrochemical Industries. They are categorised by their type, grade & size.

Types of Petrochemical Stud Bolts we are Manufacturing 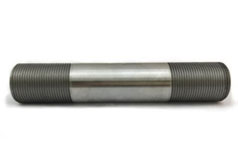 Double ended threaded studs are a kind of fastener that have equal lengths of their shaft threaded on both the ends of the fastener. These fasteners are available in four classes of stainless steel.

Stud bolts are a type of bolts that are commonly used in the Petrochemical industry. They come with a variety of uses and benefits over other similar fasteners .With so many different types and sizes of nuts and bolts available, as well as a range of defining factor like thread types, it can be tough to know what’s what.

Stud bolts can be made from a range of raw materials. Some of the most common and durable materials used to make stud bolts include B7, B8, B8M, L7 and B16. We manufacture stud bolts having detailed information on compositional and mechanical properties of each of the metal types as well as traceability of the raw materials.

Petrochemical stud bolts play an important role in the petrochemical industry. The electric furnace is one of the main tools for making stud bolt screws and after several castings and heat treatments, it turns into a shiny rebar. stud bolts are marketed with different coating depending on the type of use and the place where it is to be used. Galvanized, Teflon, stainless steel, carbide and dichromate are among the coating we do.

Stud bolt’s production process has special sensitivities and is complex and precise and must be considered in terms of the amount of load and the tolerable temperature. It should be noted that in this industry, we see stud bolts, which are a sort of hardened rebar and are made of En8. En18, EN19, 41Cr, 42CrMo4 raw materials. The threads on the stud bolt form in millimeters or inches on the stud bolts, and its grade hardening operation will be detected from 8.8 / 10.9 / B7 / B8 .

One of the most useful threads for stud bolt is the large thread or UNC. But if you work with small and sensitive parts, fine thread or UNF will be suitable for you. UNF is used where more torque is required than UNC.

ASME B18.2.2 specifies the dimensions of inch nuts. We can provide face washers & double chamber on Nuts.

The washers are made of steel according to the standard and will comply with ASTM F 436 / ISO 7089 standard. 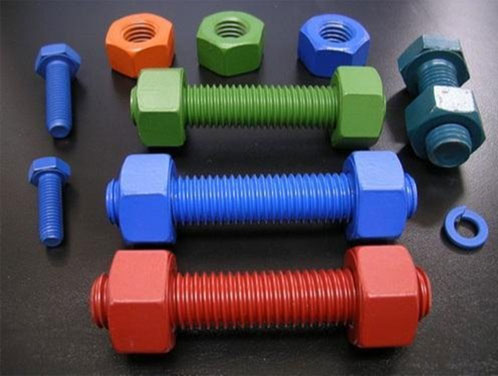 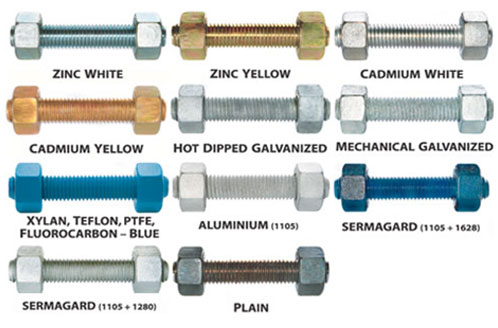